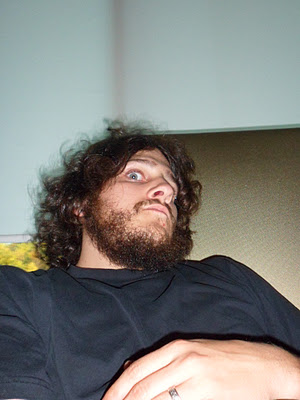 Knowing exactly when our second child would arrive was very surreal. I went back in forth from being utterly calm about the whole thing, to inwardly freaking out in anticipation. I did end up getting about as much sleep the night before as I usually did throughout the last few weeks of pregnancy {so, not a lot, but again…I was totally expecting sleep to be an impossible fleet}.

When our alarm went off at 4:45am, I was already awake, just laying in bed thinking…today’s the day, in a few short hours I will be holding my baby boy in my arms. And it was weird. I had a quick shower and Matt and I got dressed and finished packing. Matt loaded up the car with three overnight bags – mine, his and the baby’s. I carried out the little present that “the baby” got Nolan {because I read somewhere that it helps if the new baby “gives a gift” to the older sibling? I don’t know. I’m kinda insane}.

I sort of threw up in our drive way before we left for the hospital, I was so nervous. It was just bile {you know, since I hadn’t actually eaten or drank anything}, but still. I felt like a wuss! It was just strange, knowing exactly what was going to happen.

We got to the hospital and went up to labor and delivery to get registered. We had to wait an hour and a bit before they could start giving me my DDAVP {anti-bleeding medicine} through the IV. So mostly? Matt and I snoozed. Or tried too. My dad called to wish us luck, and I tweeted a bit. I think. It’s hard to remember now.

At exactly 8am the nurses came in to get us moving to the OR room. I had to drink the nastiest shot of salt crap ever to “settle my stomach” {but I think a shot of whiskey would have been a better choice – har har, just kidding}. Matt had to wait outside the OR while they did the spinal, and I’d like to tell you that I was all calm and happy about it but I was NOT. I was shaking like a leaf, trying to practice the breathing technique the poor nurse holding me suggested. She also tried to take my mind off the whole needle in the back thing by asking about our first born, Nolan.

Finally, the needle in the back thing was over and done with and I laid down and let the horrible pins and needles feeling set in {you know, the feeling just before you loose feeling}. I started to feel super nauseous and when they let Matt in the room, I was already throwing up bile all over myself. So klassy.

Before they even got started, I was already crying to Matt that I was so very thankful this was the last time I had to go through this. I guess I blocked out a lot of unpleasant memories about my first c-section {although I’ll admit it: the thought of natural birth terrifies me even more than another c-section, not that I have to worry about either or}.

Matt tried to calm me down by talking to me, and it worked – for a bit, but then I just started letting myself feel things. I “felt” when they pulled Archer from my womb at 8:30am on the dot. Not the pain, just the pressure and the sensation that he was gone, gone from the place that I had carried him for 38 weeks. I gasped and went back and forth from wanting to cry to wanting to shout for joy that he was finally earthside.

Archer went straight over to the nurses to be checked out. He passed the tests and was placed in Matt’s arms 8 minutes later. Those 8 minutes felt like eternity to me, I kept asking if he was okay and straining to see him.

When he was finally in Matt’s arms, being held to me so I could see my baby and kiss his sweet swollen cheeks, I could not get over his HAIR! I definitely wasn’t expecting our baby to have so much of it!

Matt was allowed to stay in the room with me, holding Archer, while the surgical team completed the rest of my c-section and did my tubal ligation. When they had only 10 minutes left in the procedure, Matt had to go with the nurses back to our birthing suite to weigh and measure Archer and get all set up so that when I got there, I would be able to hold him immediately. Archer weighed 7 pounds exactly and measured at 18 and a half inches long.

Again, those ten minutes took forever but then I was finally wheeled back into our birthing suite where my hubby and baby were waiting. The nurses wanted to check my vitals before I held him, but I kept begging for him. FINALLY, they placed him in my arms. 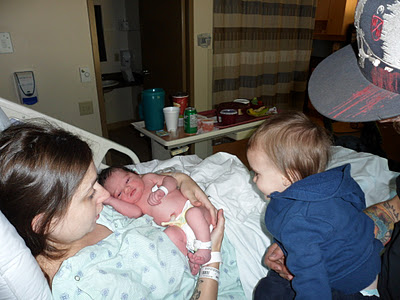 And he fits perfectly there.Welcome to the clan, Archer!